A Home Away From Home: The George A. Jackson Black Cultural Center 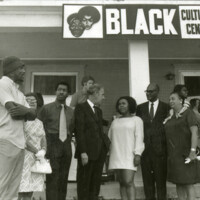 This exhibition was created to recognize the 2020 50th Anniversary of the George A. Jackson Black Cultural Center.

A student protest, following the murder of Martin Luther King, Jr., was the impetus that established what is now the George A. Jackson Black Cultural Center (BCC) at Iowa State University. On April 4, 1968, Black students gathered to form the “Afro-American Students of Iowa State.” Two days later, on the evening of April 6, approximately 50 demonstrators from this group gathered at the Memorial Union and toasted to “Black unity on campus,” then tossed away their cups, overturned the tables and chairs and left. Within weeks of this action, the students had laid out their purpose in a constitution and formed the Black Student Organization (BSO). The BSO became the leading voice on campus over the next several years in a push for equitable treatment of Black students, the hiring of Black faculty and staff, the creation of an African Studies program, the promotion of cultural awareness on campus, the establishment of a center where Black students could share life experiences, and providing support in a predominantly white institute.